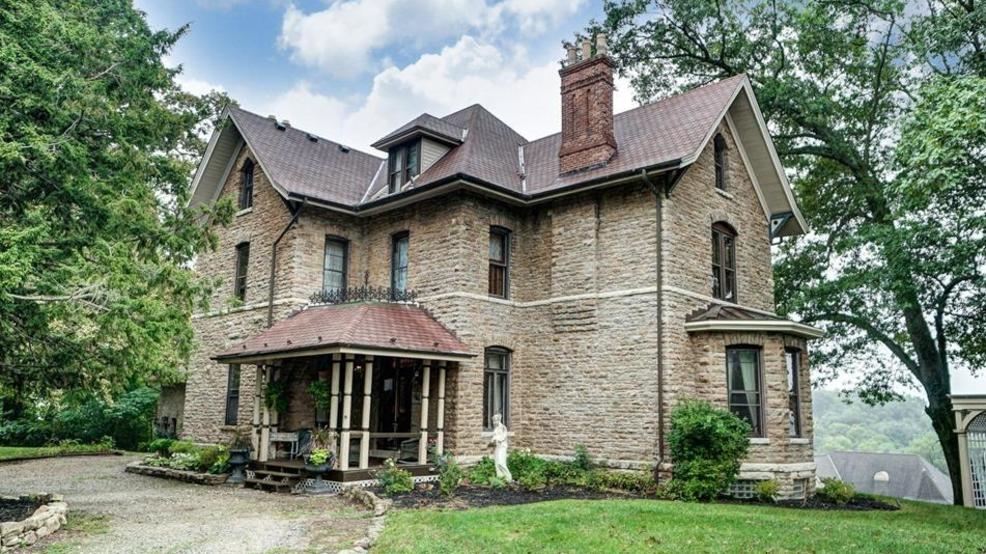 The Aston Oaks English Manor in North Bend was built between 1855 and 1872 on land once owned by President William Henry Harrison. The property, which overlooks the Ohio River, was also home to a famed horticulturist named Dr. John Aston Warder and his experimental farm where the country’s first forestry and fruit experiment stations operated. 10 Muirfield Drive is currently on the market for $795,000. / Image courtesy of The Cagney Family Real Estate, Coldwell Banker West Shell // Published: 10.22.19
SEE MORE

How are the ninth President of the United States, the Father of American Forestry, a local 19th-century English manor home, and (maybe) your future home all connected?

A scenic North Bend property that's on the market.

High atop a hill in North Bend, 10 Muirfield Drive, also known as the Aston Oaks English Manor, overlooks the Ohio River and its valleys. Today, it sits near one of the best golf courses in Cincinnati, but back in the late 1800s, it was the site of what was technically the Midwest’s first fruit experiment station and the country's first forestry station.

It all started in 1855 when a Cincinnati doctor gave up his medical practice to pursue his side hustle: horticulture. Dr. John Aston Warder had been the president of the Cincinnati Society of Natural History, was involved in the Cincinnati Horticultural and Astronomical Societies, and had edited and wrote for horticulture journals.

Not only that—Warder was an advocate for the beautification of parks and cemeteries, having been involved in the founding and landscaping of Spring Grove Cemetery where he was later buried. He also would go on to be the founder of the American Forestry Association.

That year, Warder bought 325 acres from former first lady Anna Harrison, William Henry Harrison’s widow. The land had been part of Harrison’s estate in North Bend and was the site of one of his mills.

Warder moved out of his home in Clifton and into a frame house on the property. In 1872, construction on his three-story, English manor-style home was completed and the craftsmanship is INCREDIBLE. The outside was constructed with oak, cherry, and maple trees that grew on the property, and it boasts beautiful natural stonework. Inside, you would've found (and will still find) a hand-carved, solid oak staircase, nine uniquely crafted fireplaces, and sweeping views of the river.

And with the home being owned by a famed horticulturist—you know the landscaping was amazing, too. An acre of Warder's front lawn was a formal rose garden. (Because can it really be an English manor without one?) His driveway was lined with irises, and beyond the home were acres of fruit orchards, ornamental trees, and shrubs that Warder studied the rest of his life.

Warder's home joined the National Register of Historic Places in 1978. It was bought and renovated by its current owners in 1999.

And there's good news for you if you're in the market for a historic home that was the setting for great advances in modern forestry and horticulture: It's for sale!

While the land has been parceled off over the years and Warder's fruit orchards and gardens are no more, the home itself is still a great buy at $795,000. It has eight bedrooms, three-and-a-half bathrooms, the original hardwood floors, and a stunning mosaic tile floor designed by an Italian artist in addition to tons of other features that will transport you back in time.

Not to mention there's a carriage house on the property that can be its own little living space. The property is also zoned for a bed & breakfast.

And probably best of all: shading the manor is Ohio's largest English oak tree—a fitting tribute to all of Warder's work.